Ditto talks to Tony Goodwin of Twisted Pixel about LocoCycle and gets a game demo!

Last year at PAX East 2012, Ditto talked to a great indy company called Twisted Pixel, and their game ‘The Maw’ ended up being Dittos’ favorite new game from the show.  This year Twisted Pixel were back, bigger and badder than ever, with an all new game coming soon, called ‘LocoCycle’. It’s a crazy fusion of driving game and fighting game, where you play I.R.I.S the AI Motorcycle AND Pablo the mechanic, who is unwittingly (And Hilariously) dragged along for the ride as I.R.I.S goes haywire.

As you’ll see, the action is fast and intense, and parental guidance is suggested, because while the game is very cartoony and ‘cute’ and there is no realistic violence, it is still definitely a fighting and shooting based combat style game.

Ditto was lucky enough to get an interview and a great game demo from Tony Goodwin, Senior Character Modeler for Twisted Pixel (And Ditto really messed up his name – sorry Tony).  He talked about the game, the great voice talent they used for Pablo, and then showed off the game with a live demo and let us film the whole thing.  This is Dittos’ first full private game demo, which is a pretty big deal, and it was great talking to Tony and all the guys at Twisted Pixel again – it’s great to see them coming out with something so unique and fun! 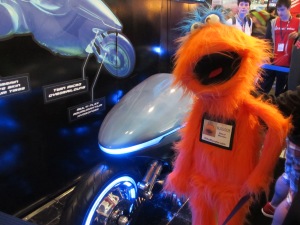 Ditto with the I.R.I.S. Bike from LocoCycle

The SPIKE Bike from LocoCycle

This entry was posted on March 28, 2013 by dittowizard. It was filed under PAX East, vBlog .