Since pretty much everyone in the world is playing the phenomenon known as Pokémon GO now – including Ditto – and if you were not aware, the game involves walking around in the real world, exploring areas and looking for Pokémon to capture. Since this is a LOT different than the typical games you play on your computer, Ditto wanted to talk a little bit about safety while playing this new game – it’s a REALLY fun game, but there are definitely more safety concerns around it than your typical MMO…

First, and the game tells you this pretty much every time you start it – always be aware of your surroundings!  Pay attention to where you are walking and what is going on around you, and don’t walk around just staring down at your phone.  Ditto doesn’t even look at his phone while he’s playing, unless he gets an alert that there is a Pokémon or Pokestop in his vicinity – the game will vibrate and give an audio alert when either of these things happen, so you won’t miss them even if you’re looking around you and not staring at your phone.  If you are tracking an elusive Pokémon using the ‘footprints’ count in the nearby Pokémon system, just look every minute or so – the footprints count doesn’t change that rapidly, so you really don’t need to stare at it constantly to track the Pokémon. END_OF_DOCUMENT_TOKEN_TO_BE_REPLACED

Hello Everyone – Ditto wants to wish all his friends and fans a very happy and safe Halloween!!!  Ditto is getting his spooky on, as Monsters love to do, and decided to share a few pictures too! 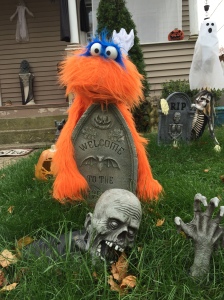 END_OF_DOCUMENT_TOKEN_TO_BE_REPLACED

Ditto and Chip Play Outside!

Playing video games is definitely lots of fun, but it’s a lot of fun to do other things too…  See what it takes for Chip to convince Ditto to stop playing his new game and enjoy having fun playing outside!! Playing outside and being active isn’t just fun, it’s really good for you!

Ditto and Chip – Let’s Play Outside!

Ditto is playing Video  Games when Chip comes in

Chip:  Aw, but it’s the first sunny day we’ve had in a week – wouldn’t it be more fun to ply outside?

A few minutes later, Chip has an idea…

Chip:  It’s a physics-based action game – you need to move your ‘avatar’ properly to play.

Next scene – Ditto and Chip are outside playing on the swings.

Ditto:  That was pretty clever, Chip – you’re right, this is lots more fun and it’s a really nice day!

Mister Crimp offers Chip ten thousand points to his favorite online game – but there’s a catch! He’s asking Chip for his account information and other personal info, which isn’t safe! Ten thousand game points is very tempting – will Chip do the right thing?

END_OF_DOCUMENT_TOKEN_TO_BE_REPLACED

Chip has a problem – someone said some really mean things about him on Facebook, and he wants to get back at them, so he goes to Ditto for help.  Ditto and Chip talk about the best things to do when someone is being mean to you online.  If someone is bullying you online there are lots of ways to get help, like parents and teachers, moderators and online community representatives.

END_OF_DOCUMENT_TOKEN_TO_BE_REPLACED

Hi Everybody – Ditto here, and for this week’s video bloggy thingy I wanted to talk about something I call ‘Bullying by commenting’.

END_OF_DOCUMENT_TOKEN_TO_BE_REPLACED

You can get even more information about preparing for serious weather events and more at the FEMA For Kids website.

I’ve been meaning to write this for a few weeks now, with all the LulzSec hacking attacks going on.  In recent months, this group (and others like it) have compromised hundreds, maybe thousands of systems, and publicly released hundreds of thousands of account usernames and in many cases, passwords. And get this – sometimes the systems that are compromised don’t even know it, so you can’t rely on the media or a hacked company to tell you about a hack 100% of the time.  Hackers have gained access to personal and financial information from retail sites, gaming sites, even media forums, so I just wanted to warn people and talk about passwords a little… END_OF_DOCUMENT_TOKEN_TO_BE_REPLACED