A Sad Day for Ditto…

As many friends and fans know, since my triumphant return from the all you can eat buffet I have put out a few new videos, but then started having technical issues…  small at first, like the audio being weird, then I suddenly had a corrupt OS and needed a re-install, then finally I started getting random restarts and other bad things.

I got my trusty laptop looked at, and the news was dire; motherboard issue, not repairable, need a new motherboard (and let’s face it, I’m not under warrantee, so this means new laptop)

So that’s it – this isn’t ‘goodbye’, I hope, but making gaming video content requires a stable laptop that can run games and do recordings, etc…, and it will be a while before I can swing that, so for now I won’t be posting any new gaming videos.   I might figure out some content to create with my phone, like the video here, but they likely won’t be gameplay vids…  sorry about that.

To all my loyal friends and fans, I thank you for all your love and support over the years, you make this furry orange monster so happy!!  I’ll still be on twitter and stuff, I won’t disappear completely, and hope to see you in the spiral again some day soon!!

Hey, whatever happened to that Ditto guy??

So once again Ditto has been offline longer than intended – full disclosure, I have bronchitis, so doing any recording (or anything more than, say, coughing a lot)  has been problematic.  Sorry about that – after everything else and my big lack of updates in 2016 in general (that was just the worst year, wasn’t it??)  I really did make a promise to myself to give my fans at least a few videos a week, and I’ve had to backtrack on that a bit – I am sorry about that, but with the bronchitis I’ve had to rest a lot more.  I’m sure you all understand…. 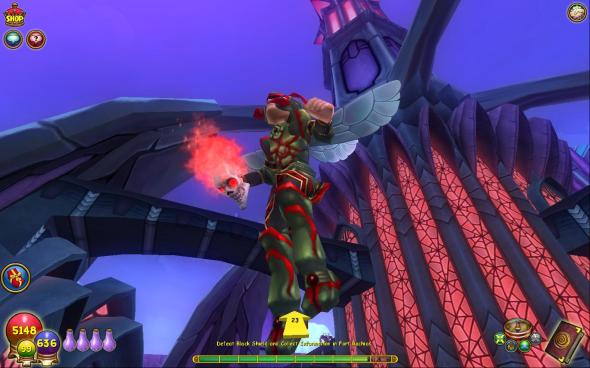 I have still been playing Wizard101 a bunch and I’m still having a ton of fun, I really am!!  I’m playing through Khrysalis (still – I know…) and I’m still getting back into the swing of things as far as the streaming goes, but I’m on the mend and will definitely be focusing on lots more streaming coming soon.  I think I’m really going to focus on Wizard101 (and probably more Pirate101, since I do love the story there) but my experiments with other game streams did not go as well as I had hoped – I’m the Wizard101 monster, so I’m thinking I should focus on what I do best, right??  That makes sense, right?

Finally – my last video, which I think has some audio issues and a complete lack of focus because, as I said, bronchitis and such… I don’t know if I ever posted it anywhere so here it is… Not much there, but hey, it’s still fun, right?

So what else do people want to see?  How can Ditto revitalize his channel once he comes back from all this?  Thoughts?  Ideas?  Clever limericks?

Ditto versus Death Month! Is the bloggy thingy really needed?

Ditto is once again adventuring in the spiral, still working his way through Khrysalis (yes, two worlds behind right now… working on it) – This is an intense one with a big boss fight, against this crazy death moth boss monster…

I’m curious – is the Bloggy Thingy still needed?  Just about all my content is YouTube and Twitch and Twitter, so people don’t really need to go through the blog to get my new stuff (and in fact the newest stuff is on Twitch and YouTube well before I post it here….)  – I don’t get much in the way of comments or fan interaction here, so I’m wondering if there’s anything other than contests that people come here for?  Leave a comment if there’s anything you come to the bloggy thingy for, and if there’s more that you’d like to see here?  Non-video non-gameplay posts, anything like that??

Ditto was Definitely Abducted by Aliens….

So Alien Abduction is the story I’m sticking to…  Totally true, that’s what happened, the end….

Here is a new gameplay video, with Ditto delving deep into Khrysalis, fighting monsters to get stinky stuff to get through spiderwebs…  And then it got really crazy!!  Thankfully I met up with a great pick up group who helped me in the intense battle for the Moon Gem…  It was a lot of fun – I’m so glad to get back from my alien encounter so I can play again!   The audio does get messed up in there a bit – I have some technical issues, but it’s not too bad…

Ditto continues his introduction to the still fun Asheron’s Call – in this video we trek through a very creepy spooky dungeon full of murderous giant insects!  The was very dark and the sounds – ew, those sounds when the weird bug doors opened and closed, I won’t soon forget those!

So where has Ditto been for so long?

I wasn’t sure if I would post all this, but I decided it had been long enough since I had posted anything that all my friends and fans deserved to know what really happened.  I wasn’t going to go into real details, because I like to keep my blog very light and happy and friendly, but after thinking it over and after being offline so long, I decided I should just let people know what was up…

Back in the early summer Ditto started to not feel so good, and then started feeling worse, until I finally went to see my very nice doctor, and he checked a bunch of things, and then sent me to one of his other doctor friends, who checked a bunch of other things.  They took x-rays and then put Ditto in a big machine, and did some more tests.  It was really interesting, but a little scary too, I will admit, and I still wasn’t feeling very good.

Well, after all the tests, the doctors decided Ditto needed an operation, and that was pretty scary too, I have to admit.  That finally happened about two weeks ago, and Ditto has been recovering, and I am happy to say I am feeling much better and I’m planning on getting back to streaming and posting videos very soon…  This week, if everything goes as planned.

I wanted to thank everyone who has emailed me and has been checking up on me while I’ve been offline, it really means a lot to me, and I’m so lucky to have so many great friends and fans out there!!

Keep playing safe, and I’ll see you in the spiral!!

Winners in the ‘Ditto’s Back’ contest!

So Ditto took a little break, but I guess folks missed me, because the response to this contest was pretty overwhelming, with so many wizards and pirates welcoming me back with the nicest emails!!   Well, I’m very happy to be back, for sure, and can’t wait to do lots more videos and have lots more fun in the Spiral and beyond!!   Thanks to all who entered, it was great to get so many entries – here are the winners, all randomly chosen.  Congratulations all!!