With all the ‘shock and awe’ of the PAX East expo floor, it’s really nice to find something unxpected among all the noise and flashing lights, and that’s just what Ditto found when he talked to Jared Kasl of Pagoda West Games about their fun and clever platformer, ‘Major Magnet’.

Major Magnet stood out from the crowd for a few reasons for Ditto – first, it has very cool, quirky characters and a very lighthearted, retro feel to it. It actually reminded me of one of my old favorite games, Sonic, in all the right ways – Kind of hit me right in the feels… The second reason is that it takes well known mechanics and kind of ‘flips them’ in new and interesting ways. For example, instead of controlling your character, you control the environment around your character to move him forward and complete the levels, which is both fun and really challenging. The game takes the best parts of a classic platformer and the newer style mobile physics game and blends them seamlessly into a fast paced, fun adventure that kids and parents will definitely love.

Jared was great to talk to, and Major Magnet is available now for iOS and they are working on an Android version too! 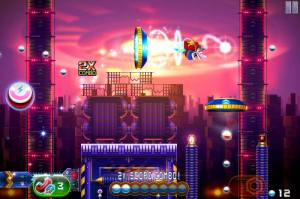 This entry was posted on March 27, 2013 by dittowizard. It was filed under PAX East, vBlog .