So I’m going to try and report on Destiny HexCrafter every Friday, because hey, it’s Friday.

As a quick recap, I am playing a new character in Wizard 101, Destiny, who will not use anything but the starter deck, wand, and robes she was given upon entering Ravenwood, going through the game with only starter equipment.  It’s an interesting challenge and really makes you think about the game in a whole new way and I’m already asking questions like ‘How am I going to win boss fights using only 14 cards and 5 treasure cards??’

Currently, Destiny is level 6 Death school with no secondary school chosen yet.  She has 572 health and a whopping 26 mana.  I think Digby had 100+ mana by this level, if I remember correctly.  Lower mana is definitely noticeable, too – I’ve never actually had to check how much mana I had before jumping into a fight before, because with all the mana bonuses that even low level robes and rings give, it was never a concern. I do find myself almost automatically moving to equip good drops, I have to think about it to keep from upgrading my equipment sometimes, it’s almost a subconscious response after over a year playing ‘the other way’… 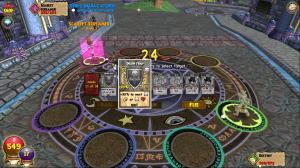 Another early annoyance is the wand – not having a zero pip damage spell available is a lot more annoying than I realized it would be, though having an occasional thunder snake to play is handy (when I don’t fizzle, at least).  I never really thought about how much I used zero pip damage in the early levels, but with anything other than my trap spell costing a pip I find myself passing a lot more than I ever did before.

Without a mount things are slow going, too – there are a lot of quests in Wizard City that have me running all over the place, and I’m so used to having a nice speedy mount, walking feels painfully slow…

OK I’m spoiled, I admit it…  Mounts are wonderful.

Duels definitely got easier with my Ghoul spell, since ghoul + death trap = 208 points damage, which defeats most opponents while giving me 104 health in return.  Death school was a good choice for this experiment.  Golem Tower, on the other hand, is still beyond my capabilities, due to low health and lower mana.  I’ve failed on the fourth floor a few times now; I’ll just have to come back and do it again later.

By far my biggest and most unexpected result so far has been the reaction of some other players to my new character, who is a girl.  I didn’t think anything of creating a female character for this, since I am a furry orange monster and things like that don’t matter to me – male or female, doesn’t matter, they’re the same to me, one isn’t better than the other, right?  I have a male character, I figured make a female for this – it was nothing more than that.

Well this has been more eye opening (and admittedly a bit more disappointing) than I ever expected.  I got my first friend request when I was still in the Headmaster’s office – which I didn’t think was unusual until they private messaged me that I was pretty.  I had another player follow me through unicorn way telling me I should ‘be his girl’ over and over again.  I had 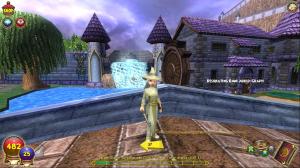 another who told me they would give me all their treasure cards if I would hang out with him and talk to him.

If only they knew they were flirting with (and yeah, kind of harassing in some cases) a furry orange monster.

I was definitely shocked at the response, to say the least.  In all cases I explained politely that I wasn’t interested, in all but one they were polite back and didn’t continue to bother me, and in the one case that they did continue to pursue me, I simply blocked him and was done with it.  Still – unexpected results for something that wasn’t even officially part of the experiment…

So that’s week 1, it’s been interesting so far, but I can tell deck construction is going to be an art form here, picking and choosing only the most critical cards since I have such limited space.  It’s going to be exciting!

See you again next week, hopefully at level 10 or higher!!

This entry was posted on April 29, 2011 by dittowizard. It was filed under Destiny .