A heartfelt ‘Thank You’ to Leesha Darkeart

As most people who are fans of Ravenwood Radio know, as of this weeks’ show the beloved Leesha Darkheart has stepped out from behind the microphones as co-host of the show so that she may pursue other things, though she will still be staying on in a production-type capacity and I’m sure will still be around the Wizard 101 community, keeping us all in line!

Though I never actually ‘met’ Leesha, we have gotten together a few times online and played in-game together, including our now infamous ‘A-Team’ assault on Big Ben, and she was always wonderful, funny, and of course had mad Necromancer skills that I still envy 🙂 and that’s hard for a Pyromnacer to admit, let me tell you! 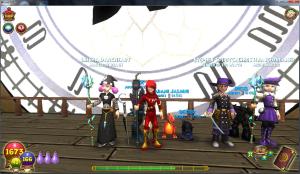 Ditto and friends in Big Ben

Of all our contact, the most memorable for me was early last year, shortly after I opened my blog. I had been a fan of Ravenwood Radio for a few episodes and had even done a quick birthday shout-out for someone on the show as a favor. The chat room seemed to like it and I got some really nice feedback, and I was already a big fan of the show segments, so I sent Leesha an email to see if she would be interested in an idea I had, for an ‘old-time radio serial’ styled piece. She answered back right away and loved the idea, which meant a LOT to me!! You see, believe it or not, it’s often hard for Fabricated Americans to be taken seriously in entertainment unless they are teaching kids how to count to ten or learn the alphabet in some brightly colored playground. A Fabricated American doing a serious (ahem) radio drama was unheard of at the time, so Leesha really stepped out on a limb to give me the opportunity at Ravenwood Radio, and I’ve always deeply appreciated that!

Fallon will be an amazing and worthy successor, I’m certain, and I can’t wait to hear more of her insights into the worlds of Wizard 101 and beyond, especially with her prowess in PvP (A segment of the game that is still a complete mystery to me), but I just want to sincerely thank Leesha for giving a monster a chance!

Thank you Leesha, for all you did for this furry orange monster, and for the Wizard 101 community as a whole! You will be missed!

This entry was posted on February 18, 2011 by dittowizard. It was filed under Daring Adventures of Ditto, Wizard 101 .