In Defence of the Trolling Stone

As most Twizards know, Wizard101 had a countdown timer on their launcher and website all week, counting down towards today.  Well, today came, and we learned that we got   the same Pet Rock we got for last April Fools, but with cute disguise glasses on.

When I saw him, I thought he was very cute, as well as a clever April Fools gag, especially with the name.  It wasn’t some earth-shattering new game feature or uuber-pet, but for what it was – a silly April Fools gag – I thought it was fun, and I know we all had fun with the build up and anticipation.

And I think that’s where it went a little wrong – all that anticipation, all the exciting things going on in The Spiral, and today’s reveal may have seemed a little anti-climactic.  When people started seeing what it was, there were some notes of open disappointment and even near hostility in one case that I saw.  I think some people had built it up in their heads so much that the reveal of a minor (though adorable) tweak to last year’s gag pet was a serious  letdown. 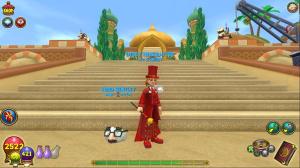 The Noble and Bespectacled Trolling Stone

Well I just wanted to defend the noble and bespectacled Trolling Stone.  I have over 350 videos and over 400 blog posts, so I feel that I can say, with some authority, that creating any kind of content for public consumption is hard to do.  Now, creating a new pet for Wizard 101?  New artwork, new animations, new spells…. Way harder than making a blog post, that’s for sure!  So how much effort do you want KingsIsle to put in for what amounts to an April Fools gag?  Really, I think they made it easy for everyone  – the price and stats are exactly the same as the Pet Rock last year, so if you already have one of those, unless you have a thing for little animated glasses, you don’t need this one. If you missed out on the Pet Rock last year, you’re in luck – you got the ‘Deluxe Model’, complete with funny glasses.

In short – this is a fun, cute April Fools gag, nothing more – I don’t think we have any reason to be disappointed in something we didn’t even know EXISTED 24 hours ago….  I know it’s easy to feel disappointed by something like this when KingsIsle cranks out so much awesome content, but let’s be honest – KingsIsle never said ‘Super Awesome New Pet coming March 30th’, and even their announcement page is completely tongue in cheek (and really funny).

So enjoy your rocks in all their various forms, or don’t – but remember, it’s April Fools and it’s all for fun – taking an Aprils Fools joke too seriously is almost as silly as taking advice from a bunch of felt and stuffing….