Once again I discuss my weekly gaming fun – gaming from a Fabricated American point of view! Lots of great fun this week, and the best ‘game of the week’ I’ve found so far!! Of course not everything was hugs and puppies this week… there was tragedy as well – of the completely temporary virtual sort, anyway.

Wizard 101
Wizard 101 was at the top of my list with the new Halloween quests taking up lots of playtime this week – I am a huge fan of Jack Hallow and his pumpkin-headed brothers! I did some great ghost-busting and apple bobbing and pumpkin gathering, and soon I will be attacking those eerie towers floating over where the Death school used to be. Celestia fever is in high gear too, of course, but I’m not terribly worried about that yet. Wizard 101 was definitely my main game this week.

LOTRO
I played zero LOTRO this week, sadly – I was too tied up with other games and just never got a chance to log in. I will be playing soon though, as it looks like they have some cool seasonal event going on. I love these special seasonal events so I’ll definitely be checking it out soon – once I’ve finished all the Wizard 101 stuff, that is!

Backyard Monsters
So this week was all about attacking the new enemy tribes, and I did pretty well – I took out a few serious encampments and I’m refining my strategy – which basically means I’m updating the monsters I attack my enemies with. You’ve got a number of different kind of monsters that have differing costs and abilities, so it’s all about mixing and matching to get the best results. You could use a few high cost, powerful monsters, or a whole fleet of smaller monsters.
Of course when you attack them, they will sometimes attack back. Exhibit A – my fairly well demolished yard from earlier this week. Fortunately, even though I needed a lot of repair work to get back up and running, the attack was a failure, since my new defenses kept my town hall safe from harm. Power to the Monsters! 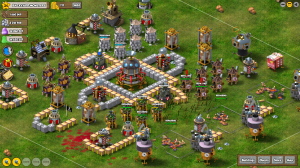 Ditto's backyard after an attack

Game of the Week
I have found an awesome Halloween-themed game this week – Braaains!!! It’s a zombie horde fight game and I became instantly addicted, because let me tell you – Monsters like zombies, it’s just a thing with us. We also like sherbet and chickens – trust me on this one….
The game is similar to things like Ninja Wars, but more fun – You dig up zombies from the graveyard, train them and equip them for battle, then attack other player’s zombie hordes. The currency is mixed – gold, brains (of course) and bones, and it really becomes a game of resource management. You can have a bunch of poorly trained, well equipped zombies, or fewer zombies that are much better trained and more effective. I’m going the ‘all the zombies I can dig up’ route and arming them as well as I can afford. It’s working for me so far. This game is definitely going to replace my daily School of Wizardry game, I think. At least for now.

The motley crew that is my zombie horde 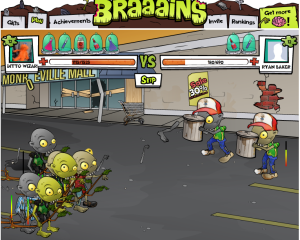 So that’s it for this week’s games – I’ve got a big 100th video planned, I’m working on that now, plus more Halloween fun and hopefully I can connect with a few friends in game and film us doing Katz’ lab soon… That would be a ton of fun. Until next time!

This entry was posted on October 22, 2010 by dittowizard. It was filed under Fabricated American, Gaming .